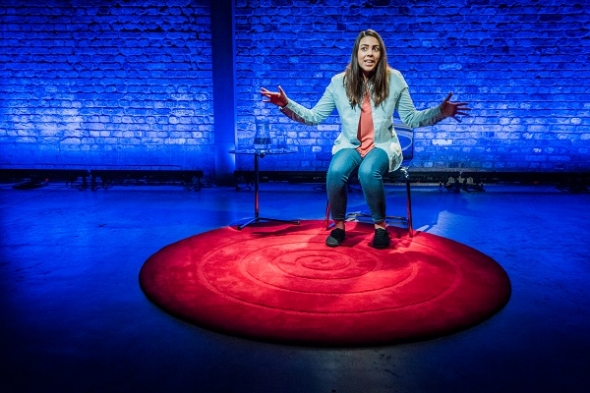 Critics laud talent in one woman tough, tender and funny play about babies being swapped at birth…

IT’S THE FARE of Bollywood movies – children getting separated at birth in films such as ‘Amar Akbar Anthony’ (1977) and ‘Yaadon Ki Baaraat’, (1973), not to mention children being swapped at birth such as that in the film, ‘Dharamveer’, (1977) – the most famous of which occurs in Salman Rushdie’s 1981 Booker prize winning novel, ‘Midnight’s Children’ where the destinies of Saleem and Shiva are altered by the midwife (Mary Pereira) who swaps them at birth in a political gesture. (The novel later won the ‘Best of the Booker’ prize in 1993 and 2008, the 25th and 40th anniversary of the award).

Now a new play, ‘Hanna’ written by Sam Potter explores this subject, and while she was researching the topic she learnt that globally around 19,000 children are swapped accidentally in hospitals every year.

It’s a scary thought that the child you could be bringing up may not be your birth child and this is the predicament facing, Hanna, a young mum, who as a result of a DNA test learns that her daughter, Ellie is not her child and now her ‘real’ parents want to meet her.

Khan Levy (who was recently in ‘Night at the Bombay Roxy’, as the siren, Ursula) plays 21 year-old, Hanna, with a warmth and likeability.

It is directed very simply by George Turvey and produced by Papatango Theatre Company and running at the Arcola Theatre until Saturday (January 20) before going on a nationwide tour until February 22.

She arrives on stage and sits at the front on a chair, pours herself a glass of water and talks to the audience as though we’re in her front room having a conversation.

Later as she gets more agitated she gets up and goes to the very front of stage.

Hanna is a bit shy and she has an inferiority complex but begins to tells us about herself, how she got pregnant and how her partner, Pete, one day snapped and said the baby was very ‘dark’ and therefore definitely not his.

Hanna, who is Turkish, had not seen it as an issue. Nevertheless, this leads to the test, and the shock discovery that the baby is not her’s either.

“But what we weren’t expecting to find out of course was that she wasn’t mine either,” she reveals.

So, what happens next? Hanna takes us through the detail of connecting with a social worker, Sally who suggests she meets Ellie’s birth mother and her real daughter, which she does and the story moves on from there.

It’s a play about love, families, and the nature versus nurture debate. The girls and the mothers get to know each other, and Hanna realises that her ‘real’ daughter is with well-off parents whilst she cannot give Ellie, a luxury lifestyle: “I realised that they did actually live in one of those big houses and my heart sank.

“It was like an extra thing I had to worry about, to feel shit about. My daughter, who was from my blood, my ‘birth child’… well she’d basically won the lottery hadn’t she? Been upgraded.”

Hanna discovers that the other family is Asian and feels even more stupid: “I mean…not only was I the world’s worst mum for not realising for three years that I was raising someone else’s kid but it turns out I was thick as pigs**t as well because I was raising a child who wasn’t even the same race as me and I hadn’t even noticed.”

It’s funny and profound at the same time and audiences can laugh at the dark humour.

Khan Levy, who trained at the Guildhall School of Music and Drama, is a fine performer and that has been noticed by many critics who have seen ‘Hanna’ now.

“It’s an outstanding performance of a memorable and moving look at what family really means,” says The Times, while The Independent comments that it is ‘beautifully performed by Sophie Khan Levy’, and whatsonstage.com; comments that “Sophie Khan Levy who is superb as Hanna”.

www.asianculturevulture.com doesn’t want to do a spoiler and give away the drama of the situation but if you’ve ever enjoyed the films we mentioned that this play gives you only more food for thought.