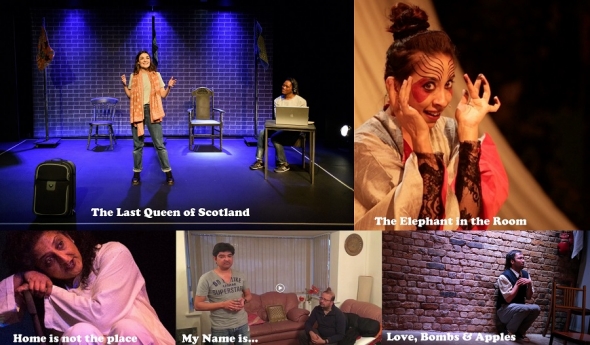 The annual gathering throws up some very different takes on life…

THERE’S the opportunity to catch up with some great new work and some tried and tested drama at the Edinburgh Fringe Festival.
Here are some of the shows that caught our attention…

Elephant in the Room
A SOLO show performed and directed by Yuki Ellias, a graduate of the Jacques Lecoq School of Theatre, Paris and London School of Performing Arts.
‘Elephant in the Room’ pays homage to Lord Ganesha one of the best-known and most worshipped deities in the Hindu pantheon, considered to be a ‘remover of obstacles’ and revered by artists as a ‘bringer of good luck’. There is also an annual festival of Ganesh Chaturthi (which this year begins on August 25), where it is believed he makes his presence felt amongst the devotees.
This multi-award-winning, magic-realism tale follows the journey of a young beheaded Elephant God, in search of his human head. “The original myth has a brutal beginning – A God beheads a son. And to make amends for his mistake an elephant life is sacrificed to replace the son’s old head,” said Ellias. “I just felt there was much more to explore rather than just the acceptance of fate. What if the boy rejects this new head, his family, his people, himself? How would he journey from his anger and self-loathing to embrace his elephant head?”
‘Elephant in the Room’ is part of a season of work as part of the UK India Year of Culture
Dates: August 3-26. No show Mon 14 August.
Venue: Assembly Rooms – Front Room 6.25pm (65 minutes)
Box Office: 0131 623 3030
Ticket info: http://www.assemblyfestival.com/whats-on/elephant-in-the-room

Home is Not the Place
ANNIE GEORGE is an Edinburgh based artist, writer and performer. Originally from Kerala, her work focuses on themes of identity and displacement. ‘Home is Not The Place’ is a new solo show, contrasting the struggles of her grand-father, the Kerala poet, PM John (Paduthottu Mathen John), with that of her own of being a migrant in the UK.
Her grandfather, who lived in the small village of Keezhuvaipur – near Mallapally – was also the focus of her earlier fringe production called ‘The Bridge’ where she touched on her search for his poetry, and was commissioned for the Glasgow 2014 – the Cultural Programme aspect of the Commonwealth Games – and subsequently toured Scotland. She also produced a short film poem, ‘At Rana Plaza’ (2013) reimagining the story of the seamstress who was rescued alive after 17 days.
Dates: August 18-27
Venue: Venue 30, Scottish Storytelling Centre, 43–45 High Street, Edinburgh, EH1 1SR (The Netherbow Theatre at Fringe) 1pm ( 60mins)
Box Office: 0131 556 9579
Ticket/Info: http://edinburghfestival.list.co.uk/event/790994-home-is-not-the-place/

The Last Queen of Scotland
THIS is a new play by Jaimini Jethwa – a woman whose family was expelled from Uganda in August 1972 when dictator, Idi Amin ordered the expulsion of all Asians from the country. Jaimini who was one year old at the time, ended up on a council estate in Dundee. Forty years on, she was curious to explore the country that Ugandan Asians in the UK get sentimental over calling it ‘heaven on earth’ and the result was this play.
Directed by Jemima Levick and performed by Rehanna MacDonald to a live soundtrack, ‘The Last Queen of Scotland’ is homage to Jethwa’s dual cultural heritage and this personal journey of self-discovery has her retrace her parent’s steps following their expulsion from Uganda and the decisions that have made Dundee her home.
In the heat and dust of Kampala, Jethwa finds more questions than answers as she confronts the past and imagines the life she should have had.
Just like the Partition of India, the story of Asians in East Africa has not been much documented or talked about, especially by the protagonists who were uniquely affected.
‘The Last Queen of Scotland’ is a Stellar Quines theatre (a company that celebrates and champions work by women) production co-commissioned and supported by National Theatre of Scotland and Dundee Rep. It is already a hot ticket at the Fringe – check for returns.
Dates: August 3-26
Venue: Underbelly, Cowgate, 66 Cowgate, entrances on Cowgate and Victoria Street, EH1 1JX 6.50pm (60 mins)
(Iron Belly) Box office: 03333 444167
Ticket/Info: http://www.edfringe.com/event/2017LASTQUE_UF

Asif Khan plays one of four characters in his solo show

Love, Bomb, & Apples
A ONE-MAN SHOW performed performed by Asif Khan has just been long listed for Amnesty International Freedom of Expression award at the Edinburgh Fringe.
Written by Hassan Abdurazzak, this virtuoso production explores masculinity through four men: a young Palestinian actor who meets a beautiful English girl and he has only one thing on his mind; an aspiring Pakistani writer wants to write his seminal novel but gets branded as a terrorist; a disenfranchised young man from Bradford wants to own an i-phone and is drawn to radicalism; and lastly, a New York couple with opposing views on the Palestinian/Israel relationship.
This originally toured in 2016 and Khan is a fast-rising star whose first play ‘Combustion’ has also received accolades and award-nominations.
Read an interview with Khan and its the writer of ‘Love, Bomb & Apples’
Dates: August 16-27 (No performance next Monday (August 21)
Venue: Summerhall (Anatomy Lecture Theatre) 1.30pm (60 mins), I Summerhall Edinburgh EH9 1PL Tickets: £12 (£10)
Box Office: 0131 560 1581
Info/Tickets: http://www.edfringe.com/event/2017LOVEBOM_9S

Screenshot from trailer for ‘My Name is…’ follow link…

My Name is…
IRRUPTION THEATRE is a Birmingham based amateur theatre company, who are presenting ‘My Name Is…’ a semi-verbatim theatre piece, based on interviews conducted with illegal immigrants to the UK.
Arun, a British Asian government official who works as an anti-terrorist officer is deeply shaken by the news of the atrocities in Paris, where his only daughter lives.
As his anxiety increases, he discovers that a mysterious house-guest has been living in his house for the past week, without his knowledge, and finds he has more in common with him than he expected. Age guidance 14+
Dates: August 21-23 (not August 24); August 25-26
Venue: the Space on North Bridge, Royal Mile, EH1 1SD (The Argyll Theatre) 7.05pm (50 mins)
Box Office: 0131 226 0000
Ticket/Info: http://tickets.edfringe.com/whats-on/my-name-is

Nassim
DESCRIBED as an unusual theatre experience, this has been conceived by by Nassim Soleimanpour.
In this , the actor is not allowed to look at the script beforehand, there are no rehearsals and they turn up on the night ready to begin.
A daunting task for anyone and www.asianculturevulture.com saw it in preview at the Bush Theatre, London, (which is putting on a retrospective of the Iranian playwright’s work in September*)
On that night it was actor, Vivienne Acheampong who treaded the boards, and was presented with the script which she opened and the audience are able to see it via a screen.
The actor begins to read the words on screen, and as we continue, Soleimanpour, also appears and by various theatrical flourishes, we learn a lot about the writer, his life, some Farsi and ultimately, about humanity.
I don’t want to spoil the fun as the show is really to be experienced and will be performed by different actors to be announced. It has already received a Fringe First, an award given by The Scotsman newspaper at the Edinburgh Fringe for new writing.
Dates: August 16-27 (No performance on Monday, August 21).
Venue: Traverse Theatre, 10 Cambridge Street, EH1 2ED (Traverse 2) Time vary check guide/link
Box office: 0131 228 1404
http://www.edfringe.com/event/2017NASSIM_TR

Privacy & Cookies: This site uses cookies. By continuing to use this website, you agree to their use.
To find out more, including how to control cookies, see here: Cookie Policy
← ‘The Forgotten Army’ – Lessons from history as nationalist inspired Indian drama hits Amazon Prime…
‘No fathers in Kashmir’ – Oscar nominated director Ashvin Kumar talks of connecting young people as troubled release comes to the UK… →