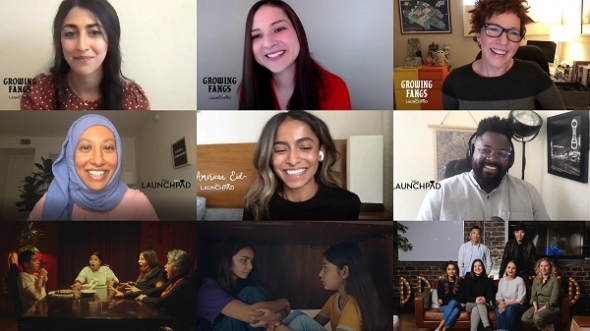 Global behemoth selected six writer-directors from over a thousand applications in the US to tell stories that were personal and about under-represented communities and were penned by filmmakers who originate from such groups – acv spoke to Mahin Ibrahim and Phillip Domfeh, the Disney executives managing Launchpad in its first season and Aqsa Altaf who made a film about a Muslim immigrant family in the US and also the team behind ‘Growing Fangs’… These short films are available to view on Disney +

DISNEY Launchpad is a new initiative that aims to tell stories from underrepresented groups and mentor filmmakers through the production process.

There are six films in this initiative that can be seen on Disney + (streaming platform).

They are all short films and the production values, as you might expect, are very high – it’s debateable whether these filmmakers would get such resources and expertise so early in their careers, but you can judge the results for yourself – if you subscribe to Disney +.

Acv interviewed writer-director Aqsa Altaf who made ‘American Eid’ perhaps the film with the most obvious direct relevance to acv.

It also spoke to Mahin Ibrahim who heads the Launchpad programme and is director of Disney’s diversity and inclusion, market. Joining her in that video is fellow executive Phillip Domfeh, who will be managing Season 2 Launchpad – submissions closed on June 11. Sadly, for now, and as we discuss in the video, this shorts ‘incubator programme’ is only available to potential filmmakers in the US.

Prior to being at Disney and women-slanted media platform Refinery 29, Mahin was at Youtube where she helped to run production programmes with an emphasis on diversity for Youtube creators. She is a first generation immigrant whose Bangaldeshi origin family were not too keen on her career in the media. Hear what she says about that 👇

Domfeh, of Ghanian and Jamaican heritage and who identifies as a black filmmaker will be more involved in season 2 and listen to what he says about African-American stories not being in this crop.

In season 2, the initiative has been extended to writers. This year’s scheme which was initiated last year invited writer-director submissions under the theme of Discover. Next year’s talent will be selected around the theme of Connections. Read our reviews too of the six short films (below).

‘American Eid’– A charming, sweet tale about two sisters – Ameena and Zainab .
The younger Ameena (Shanessa Khawaja) is so excited about Eid and wants everyone to share in her excitement and joy – but living in the US, hardly anyone knows how to pronounce the word, let alone, understand that it is a Muslim festival. In pursuing her dream of requesting it to be a holiday – her older sister (Jenna Qureshi) who is trying to fit into life in the US, learns about herself and her identity. Composer Siddhartha Khosla brings a joyous Punjabi sound to the end.
Altaf is talented and articulate and in our interview very impressive – it will be interesting to follow her career as she vows to make more stories like ‘American Eid’ with a non-Western gaze.
ACV rating ***½ (out of five)
Altaf, who talks about her future direction in the interview, has enjoyed success at Cannes Lions (which highlights work in advertising and communications) and was mentored by celebrated veteran filmmaker, Werner Herzog.

‘Dinner is served’ – is about a small group of Chinese students who are at an elite boarding school in the US (modelled clearly on Britain’s posh public schools) and they want to get on – but one student’s ambition gets the better of him.
This is perhaps the least interesting of all the six films – in that it seemed ambiguous, in both execution and conclusion. The desire of the students to assimilate was not attractive and the fact they couldn’t in the end – was perhaps the point of the film – but it was a little contrived and unlike the other films aimed really at an older teenage demographic grappling with identity issues.
ACV rating: **
Made by Hao Zheng who has an acting background, studied filmmaking in the US and has already been spotlighted by influential US title, Forbes, as a 30 Under 30 Honouree (Hollywood & entertainment).

‘Growing Fangs’ – This is the most innovative and imaginative of the six – though the other Latin influenced ‘The Last of the Chupacabaras’ runs its close for this. About Val – a teenager who is half human, half vampire, this is an engaging drama about acceptance, identity and magic. The special effects managed by FX producer Shivani Jhaveri are cute. This could quite easily be an episodic series – certainly has the potential. Keyla Monterrosso Mejia (pictured), in the lead, has star quality.
ACV rating: ****
Director Pace is Mexican-American and bisexual (an important part of her identity for Launchpad) and works for Walt Disney and is an emerging filmmaker.

‘Let’s be Tigers’ is gentle, unassuming, beautiful and very subtle. Older teenage babysitter Avalon (Otmara Marrero) is still dealing with the grief over the loss of her mother, when she babysits a four-year-old and they stumble through a bedtime story…perhaps more adult in tone than it looks, it has poignancy and depth.
ACV rating: ****
Director Stephanie Abel Horowitz has a theatre background and her short film, ‘Sometimes I think about Dying’ premiered at the Sundance Film Festival in 2019.

‘The Last of the Chupacabras’ – at the fantastical end of storytelling, featuring a rather unusual and foreboding creature who unexpectedly offers company and comfort to a long lived Mexican American immigrant, hanging onto the vestiges of wisdom and joy in her indigenous culture. A decent unpredictable watch – but the creature is not cuddly or Disney, perhaps that is the point!?
ACV rating:**½
Director Jessica Mendez Siqueiros’ is of mixed indigenous Sonoran and European heritage, and her short films have featured at over 75 film festivals. Her first feature, ‘La Reforma’ about a town in Arizona in the 1960s is in development with Sundance Feature Film Program.

‘The Little Prince(ss)’
Gabriel (Kalo Moss) is of Chinese origin, seven and likes playing with dolls. He also does ballet and has a delicate sensibility. Enter Rob, another Chinese origin kid, and classmate; they get on and become friends, even though Rob plays football and is the more rough and tumble type of boy. His father worries about their friendship and is horrified by Gabriel and his interests. Nicely produced, if a little heavy handed on the message being conveyed but Gabriel is hard to dislike.
Acv rating: ***
Autobiographical, and based on a true story, Moxie Peng identifies as queer and non-binary. They began filmmaking in Beijing. Peng graduated in filmmaking from New York University and is now developing a feature.