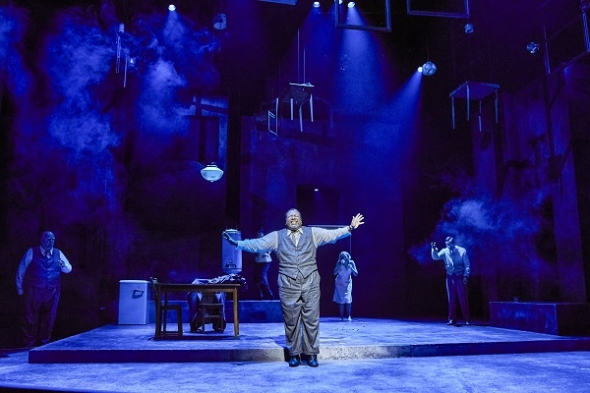 IT IS ONE OF THE GREATEST plays of the 20th century and this production of ‘Death of a Salesman‘ by Arthur Miller is now transposed into a black American family, and has been captivating audiences and really is worth seeing if you can manage to grab a ticket.

The stage belongs to the two stalwart performers, Wendell Pierce as ‘Willy Loman’ and Sharon D. Clarke as his long-suffering wife, ‘Linda’.

Originally at the Young Vic Theatre, the show transferred to the Piccadilly Theatre for a limited run and ends now on Saturday (January 4).

This is a deep story of a family under pressure, falling apart quietly – but being held together by the slender threads of a mother and wife’s unspoken love. Sharon D. Clarke is superb in this part.

Willy, a salesman at the end of his life is losing it because he can’t make enough sales to keep up with his monthly payments – travelling door to door driving in his car, and as he says: “I am tired to the death”.

His supportive wife tells him to wear his glasses and that his mind needs a rest. Willy pretends he’s making enough money but he’s really borrowing regularly from his friend, Charley (Trevor Cooper), whom he sort of envies because his son, Bernard (Ian Bonar) has managed to make something of himself, while his two sons have not lived up to expectations.

The eldest son ‘Biff’ (Sope Dìrísù), once a promising athlete is now a lost soul and drifter, moving from one job to another, whilst the younger one, ‘Happy’ (Natey Jones) is a wastrel and philanderer.

Willy is also losing his mind and having a breakdown but he doesn’t know it – and Pierce is a great performer who slips in and out of his reality and past with ease, but the audience always knows what’s happening.

We see the present and the past flashbacks played out almost simultaneously on the stage – and the past seems a time when Willy felt he could achieve something and was happy … he talks to his dead brother, Ben (Joseph Mydell) who made his fortune in Africa and is his role model – as a man who achieved the American Dream.

The play is co-directed by Marianne Elliott and Miranda Cromwell and the set (designed by Anna Fleischle), itself conveys the disintegration of Willy’s psyche.

It is like a house dissected with frames and doors that are suspended and appear to be floating in space.

This is a magnificent production conveying the tragedy and pathos of how the American Dream has failed some of its citizens. It is an immersive poetic mediation and has been a highlight of London theatre in 2019.

There are three performances left – and tickets are advertised as being available from £55 each plus transaction fee.

Privacy & Cookies: This site uses cookies. By continuing to use this website, you agree to their use.
To find out more, including how to control cookies, see here: Cookie Policy
← Cannes 2020: The Official Selections – Steve McQueen and interesting British choices, while India draws a blank despite more recent success…
Bollywood asianculturevulture vibes – It’s all going OTT and how Akshay Kumar shoot has got everyone talking… →