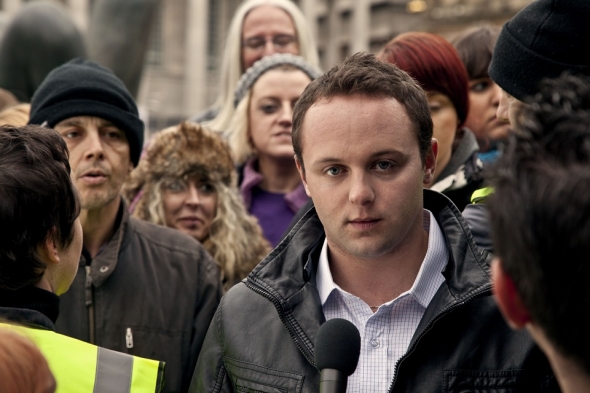 Film explores undercurrents of ‘race riots’ and rise of nationalism…

IT’S EASY to forget there was a time when there was far more social tension between communities in the UK.

One could argue there still is – it’s just gone to ground and not much reported in the media – old or new, but we will let you be the judge of that.

As a generalisation, it’s a subject that filmmakers in Britain have not much tackled (sadly) – at least not seriously (take “The Infidel” or “Four Lions”) but debutant director Sidharth Sharma has taken it head on in a film called, “Arjun & Alison”.

First premiered at the London Indian Film Festival in summer 2012, it’s now on a limited release from April 25 at Cineworld outlets.

Monique Squeri, who plays Alison, won a best actress award at the St Tropez Film Festival and the film has been highlighted by Boston University, where it also features on a course.

While much has been made of it tackling racism, Sharma appears to have a lot more to say about the subject than just simple name calling or blatant discrimination (which is how racism, essentially and largely, is still defined).

But let’s face it – racism as a subject can be a bit off a turn-off…we know it exists and what it does to us and we don’t want to be reminded of our vulnerabilities…a lot of the time.

Sure, but leave it at that and what you get is silence – and a feeling some others want us to endorse, it’s all great. Yeah.

“I’d gone back to India and had gone to film school there and I came back to rent out an apartment and go back and do a Bollywood project,” Sharma told www.asianculturevulture.com. “I landed in Birmingham on September 5 2009 and it was exactly the same day as the riots were happening and I was completely shocked. I was not aware of the undercurrents.”

So “Arjun and Alison” might be inspired by a time and a place, and communities caught in the midst of change and conflict arising from it.

At the age of 14, Sharma had been sent to boarding school in Britain and laid down some roots here, but had returned to the land of his birth, India, to further his filmmaking career.

That this film has been made by an Asian director effectively based in Mumbai prior to the movie – but British by nationality and upbringing – says something about the lack of British films that want to document communal tensions or examine multiculturalism and its discontents.

For that alone, Sharma deserves some credit, he’s gone where others usually fear to tread.

Maybe, it’s the insider/outsider perspective he has but, initially, he wasn’t thinking about making a film in Britain at all.

As he indicated, he had done two years at Whistling Woods (a film school set up in Mumbai by Bollywood blockbuster director Subhash Ghai) and was all set to carve out a filmmaking career there.

“All my contacts were in Bollywood and I had been building them up there and a lot of my teachers were well connected and there were networks with various big production houses and the natural thing would have been to use that network and make a Bollywood film.”

But it was a raw type of experience that changed all that and he felt moved by what was happening in Britain and Birmingham to respond to it.

“I saw some horrible violence (in Birmingham)” recounted Sharma, narrating the events that set him on the path of “Arjun and Alison”. “There was some terrible language and Asian kids throwing stuff.

“We have to be more accepting towards other cultures and not be prejudiced on the basis of someone’s looks, the way they dress, or whether they have a beard or not. We have to grow out of this.”

It was all kicking off – the riots were the clashes between the English Defence League (EDL) and Asian youths largely in and around Birmingham that autumn in 2009.

“Just a few months before leaving India, the same thing was happening there – in Maharashtra, members of Shiv Sena (a very right-wing Hindu, pro-Marathi, regionalist party) were beating up taxi drivers from other states.

“It was this theme of ‘my territory, my land, and its borders’ and it completely fascinated me.”

Essentially then and in basic terms, a minority but highly-motivated group, within an indigenous community, was rising up against migrants – whether they be Biharis in Maharastra or South Asians and Muslims in the Midlands – feeling their own home-grown culture, customs and language were in danger of being ‘overrun’.

“I started researching and looking at blogs and so on and there was so much in terms of hate out there – you had 16-year-old kids commenting on political subjects and making very flippant remarks. I thought I really need to address this situation and make a film about it.”

He teamed up with writer Andy Conway who put together the screenplay that became “Arjun & Alison,” and Sharma raised much of the money to make the film by realising some of his own assets.

Sharma said: “I did research for about six months and we saw a good story we could build around this subject and try not to be preachy and for it to appeal to a young student audience who have a good chance of changing things.”

It’s easy to make this subject black and white, us against them, good versus evil, but we all know real life can be more complicated, more nuanced and sometimes lines can get blurred.

Such is the character of Gordon, the leader of the “English Society” in the film, from the trailer and promo material: persuasive, charismatic and believable, touching a community’s nerves on some taboo subjects.

There are shades then there of a far more dangerous Nigel Farage (the UK Independence Party leader) type character.

“You hear of communities scamming the system, or getting married and bringing people over to get citizenship and doing all this – and you have to understand people from this perspective too. It does happen and people exploit loopholes and there is anger, outrage and xenophobia from it,” explained Sharma.

He has faced racism in the workplace, when he was a chartered surveyor in Britain before jacking it in to his follow his dream of being a filmmaker. To be fair to Britain and Sharma, he said India also had its share of “racism and classism”.

As he intelligently analysed it, it’s not even as obvious or as crude as ‘racism’ or ‘sexism’ sometimes.

“Some people don’t like change, they like things the way they are, and it’s, ‘we don’t need to change for someone from somewhere else who might become our boss’ or ‘it’s not happened before’ and they feel threatened by it and it brings out the worst in them.

“It’s ignorance. It can happen to very educated men, it’s prejudice and not being able to understand or respect someone else’s culture.”

He’s something of an idealist and a very agreeable proponent of “world peace” (aren’t we all?) but unlike many (of us), he’s actually made a film which addresses some tough and raw subjects and has something to contribute to that conversation, and in that regard – ‘Respect, Bro!’

Seriously though, his next project is more of a Bollywood type film with songs and dance and in Hindi and looks set to have a Bollywood star or two. He told www.asianculturevulture.com there were already investors for this.

Whether he ever makes a film like “Arjun & Alison” again looks like it will rest on the success of this run.

Don’t support it and you know what the answer will be.

Privacy & Cookies: This site uses cookies. By continuing to use this website, you agree to their use.
To find out more, including how to control cookies, see here: Cookie Policy
← ‘Partition Voices’ – BBC presenter Kavita Puri – stories we must tell…
(CLOSED) Win Gurinder Chadha’s ‘Viceroy’s House’ DVD and ‘Freedom at Midnight’ book in our special Independence competition and see filmmaker talk →