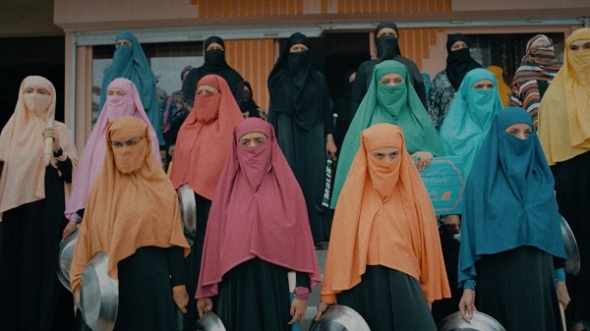 Digital offering is ambitious, challenging and director wants people to be exercised by its content…

DIRECTOR Asim Abbasi has broken new ground with the web series, ‘Churails’ (‘Witches’) – for the first time we are going to get some feisty, no nonsense Pakistani women who simply aren’t going to put up with the old ways.

The London-based Abbasi doesn’t seem like a revolutionary type, but he’s determined to chart a new course for content from Pakistan, as his first ever web series drops on Indian streaming platform, Zee 5 – today/tomorrow (August 11).

“I hope it will be a small catalyst in driving some of kind of change in people’s throught processes and the way they see power dynamics between genders,” Abbasi told www.asianculturevulture.com.

‘Churails’ is about the creation of a women-led agency which goes after errant men on behalf of wronged women.

It has four main female characters played by Sarwat Gilani Mirza, Nimra Bucha, Yasra Rizvi and Mehar Bano – who spoke to us about her role in a zoom chat (see below).

There are 10 sixty-minute episodes and it is mostly set in the port city of Karachi – and it feels like a moment for the Pakistani film and TV industry and Abbasi knows it.

It’s quite literally the first of its kind (from Pakistan) and made not just for a South Asian audience but has an international appeal, he posited.

“Absolutely, this is one of the most fundamental things,” said Abbasi speaking to acv about how ‘Churails’ came about – is ideal for streaming and could open doors for others just like him to work on an international level.

“This is just not made for a Pakistani TV channel, which uses the same tropes again and again (domestic stories where women have little to no agency) and are driven by ratings.

“Streaming platforms are driven by diversity, they want different types of content and to build a library of different content.

“They have the ability to tell unique and new narratives and not in the old ways and that is exciting as an artist.”

The series serves up narratives on sexuality, transgender, child abuse, sexual abuse in the workplace, the colonial hangover (not challenging white people), bonded labour and abortion.

Abbasi wants to tackle the patriarchy and misogyny he sees everywhere and topics that the world is grappling with.

“I think the issues I am addressing are very global and ‘Churails’ will resonate with people are not South Asian or part of the diaspora.

“I want people talking about it, reflecting on it, and re-watching it. I think even if there is a bit of a storm, once it settles down, it’s a show that will keep finding new audiences because norms change, society changes what it deems to be acceptable, and what is not going to be acceptable in five or 10 years’ time.

“I am showing what a patriarchal society looks like and how misogyny works,” outlined Abbasi who has lived in London, since he was 18 and studied at Soas, University of London.

He is acutely aware that as a male director he is telling women’s stories but told acv he made sure ‘Churails’ was authentic and credible to the women it is looking to reflect.

“There are some 20-25 primary and secondary female characters and it’s very intricately plotted and has lots of character arcs and sub-plots and at the same time, I was absolutely a man writing a woman’s story and that was a big concern, I didn’t want anyone to think this has been written with a male gaze.”

Not too dissimilar to a writers’ room on global long form content series, he had two independent female filmmakers as script consultants and they went through his scripts meticulously.

“I wrote all 10 scripts but they would tear it apart and make sure there was nothing I was saying that was not representative and I also had a female assistant director and had a lot of other female sounding boards – this has to be from a female point of view,” said the married man who also comes from a family of four sisters.

Abbasi made the highly rated and commercially successful feature ‘Cake’ (2018) – an emotional drama that had depth and was about a clash of personalities and values, as embodied by two sisters who have to tend to their elderly parents whose health is failing. It was Pakistan’s entry to the Oscars that year and it certainly helped him get noticed.

Indian broadcaster Zee’s decision to produce content from outside India for its online subscription service, Zee 5, came at a good time for Abbasi. He was invited to pitch and was originally thinking of making another feature film, but had too much for one film and so ‘Churails’ became a web series.

“It was the one that resonated with them the most,” he said.

“We believe there are cultural similarities and shared realities and it’s important to have a dialogue and I have been sitting in London having conversations with journalists in India and there is warmth towards the series and me and that’s the sort of dialogue we need to build between the public,” he said about his collaboration.

In the current political climate, where India and Pakistan are hardly talking to each other, this seems like another achievement.