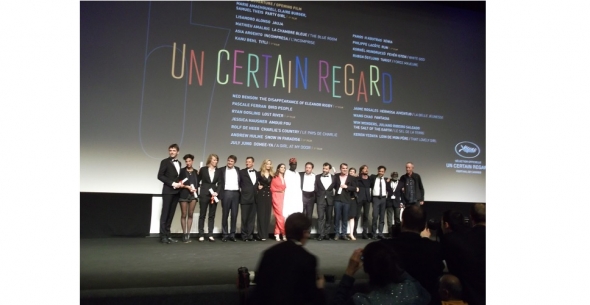 A FILM about racism scooped the much coveted Un Certain Regard Jury prize at this year’s Cannes Film Festival, beating off 19 other films from a total of 23 different countries in all.

Among those were India’s “Titli” and Britain’s “Snow in Paradise”, funded mostly from Germany.

Both are decent productions and have a lot to say about family, violence and the desire to escape a life of crime.

Despite losing out on any of the awards in the UCR category, the new directors – Kanu Behl for “Titli” and Andrew Hulme in “Snow in Paradise”, should take great heart from being chosen to premiere the films in Cannes in the UCR section, which notably recognises new and upcoming talent. The films are also remarkable for bringing an array of new acting talent to the screen with both leads, Shashank Arora (“Titli“) and Frederic Schmidt (“Snow in Paradise“) never having appeared as such. (On those two – longer and more comprehensive analysis, interviews and reviews will appear nearer the time of their UK release, provided there is one).

Both were up for the Camera d’or which goes to a first-time director. It was won by the trio of filmmakers behind the French, “Party Girl”. See below for more.

So what of “White God”? The clue is very much in the title.

While obviously about a dog and a 13 year old girl, Lili, it is also an allegory about how Europeans treat minorities, according to its now Cannes feted director Hungarian Kornel Mundruczo.

It is an astonishing ride – and Mundruczo should be commended for the way he tackles the subject and brings home an urgent message, ever more so after the European elections and a distinct lurch to the right and far right in some countries.

Hagan is a lovely mixed-breed dog which gets on well with those around him. Lili (Zsofia Psotta), his main carer, is devoted to him and all is well until Lili’s mother wants to go to Australia for three months with her new man and decides to leave her daughter with her ex-husband, a meat inspector.

A new law has proclaimed that mixed dog breeds are to be taxed, while pure species are not.

Lili’s father is already hostile to Hagan and becomes more so when he is told in no uncertain terms that he has to pay the tax or hand Hagan over to a dog pound.

Lili at first resists her father’s entreaties but realises it is ultimately futile and is forced to accept the fact that Hagan has no future with them.

At first, Hagan is naïve and trusting, believing those on the street will help him find his way back to Lili. There are hard realities along the way, not least a spell with a punishing dog fight trainer.

Hagan is a completely different animal: aggressive, predatory and very much the top dog among other ‘mutts’.

Mundruczo combines several different genres into one and the last 30 minutes or so presents a possibly apocalyptic vision, with Budapest overrun by thousands of snarling, gnashing mutts, ready to kill anyone who stands in their path.

Psotta as Lili is a perfect foil: innocent, gentle and compassionate, she alone holds the key to preventing a reign of terror led by her one-time dog Hagan.

You can see why the jury liked it – but it is a shame in some ways that Mundruczo did not deal with this subject in a more conventional manner, focusing on people. At one level, it could leave people a bit nonplussed as to what it really is about.

Elsewhere, Aboriginal David Gupilil took the best actor award for his role in “Charlie’s Country”, directed by Rolf de Heer. It is a magnificient performance and the film will be a festival crowd-pleaser everywhere.

Gulipil better be ready to travel – he is going to pick up a lot of accolades and deservedly so, for this tale which encapsulates the Aboriginal experience in Australia. It isn’t pretty but definitely worth watching.

The Ensemble Prize went to “Party Girl” by Marie Amachoukeli, Claire Burger and Samuel Theis. French and little bit too television style for Anglo-American audiences, it spotlights the problems of a woman who really wants to stay young at heart and behave like she did when he was in her 20s and 30s but is in her 60s and about to remarry. It is a salutary tale that does have some good moments but is unlikely to screen (well) here or in the US.

Among the other winners we did not catch were “The Salt of the Earth” by Wim Wenders and Juliano Riberio Salgado, which won the UCR special prize. It is a documentary collaboration between the great director Wim Wenders, who has won a Palme d’or for fictional feature, “Paris, Texas” in 1984, and the son of iconic photographer Sebastiao Selgado, looking at his work.

“Turist” by Ruben Ostlund won the jury prize. Directed by Ruben Ostlund, it is Swedish and set in the French Alps with a family from that country trying to find its bearings after a false alarm over an avalanche.

Main picture: The winners take to the stage at the Debussy Theatre in Cannes alongside the jury (in the middle) flanked by ‘Party Girl’ filmmakers at left and David Gupilil and Ralf de Heer ‘Charlie’s Country’ at the other

Reviews for these and the other films seen are here