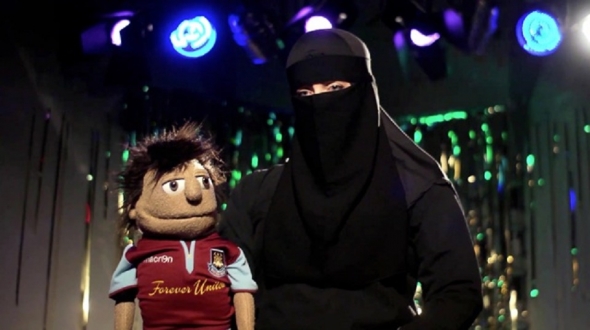 DONNING a burqa and walking around West Ham’s football ground on a match a day is Susan Husband’s idea of fun.

So what does the born and bred Eastender do for a really big laugh? Support West Ham…(currently struggling in the Premier League, albeit stopping the rot last Saturday, with an emphatic 2-0 away victory over Cardiff.)

More seriously, the comedy writer and performer is about to premiere a nine minute and eleven second film, “Knock Knock”, next Monday (January 20) at the Leicester Square Theatre in London, featuring herself in a burqa as ‘Gottla’ and a similarly attired puppet, ‘Geer’.

“I’d like football fans to see it,” she told www.asianculturevulture.com.

“People didn’t bat an eyelid when I walked around around Green Street dressed in the burqa. They were intrigued by the puppet.”

In “Knock Knock”, the two have some impassioned exchanges over their respective allegiances, but it doesn’t quite pan out the way you might think. Most of it takes place on a stage with an audience.

“I’d have loved to have gone into the ground wearing a burqa. I’ve never actually seen anyone wearing one inside,” said Husband, the life-long Hammer and one-time season ticket holder. “I guess it’s the fear of the unknown.”

But for whom exactly? That’s really one of the central questions of the film, which explores identity and allegiances. The title alludes to the common joke (knock, knock, who’s there) and the common football terrace chant, ‘Who are ya? Who are ya?’

It’s a very racially mixed part of London with one of the capital’s biggest Muslim communities, but you wouldn’t get too much sense of that once you were inside West Ham’s ground.

Naqvi, currently in Dubai filming, told www.asianculturevulture.com on email: “All my films have dealt with a theme of identity.

“I’ve always been interested in challenging and subverting expectations and so when I met Susan and read her script I was immediately drawn to it.”

Let’s say the film does a job of turning expectations on its head and reminding people that the barriers people often impose on others and themselves are more in their heads than anything else.

“There is a lot of discussion about how what you wear can be used to define and pigeonhole you,” continued Naqvi. “I hope this film goes some way to showing that’s it too easy to jump to conclusions.”

Husband wanted to write an original part for a ventriloquist act and an Asian female Muslim friend since her schooldays helped her.

“I think I was trying to imagine the least likely act you’d find doing ventriloquism and I had never seen a ventriloquist in a burqa before.”

Husband and her friend went shopping for the burqa in Green Street, which is full of Asian shops.

“I did feel kind of invisible in it,” said Husband. “And I never realised how hot it was going to be on the stage with it. My friend’s parents feature in the film at the end of it.”

Husband would love to be able to film what happened if she went into the ground, wearing her burqa.

“For all sorts of reasons, including the budget, we couldn’t do it, but it would be great if we could, having made this film.”

What do you think the reaction would be and what did you learn from “Knock Knock”?

“I think the people of East London are an accepting lot,” answered Husband, who plys her talents across a number of media and has made several shorts, including a Hindi scripted one, called “How to Kiss” (aimed at a lot of young men in India who punch this into Google, apparently).

“If you mean did I learn anything from making “Knock, Knock“, it’s never to work with adults or humans.”