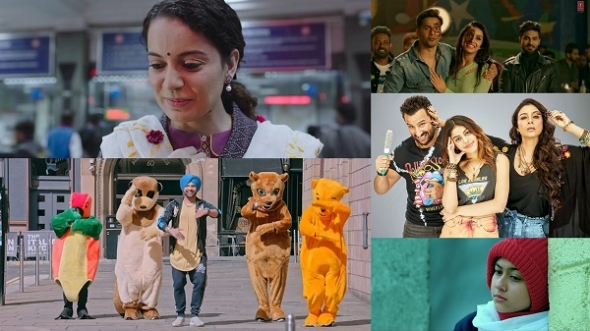 HERE’S a run-down of what’s happening in Bollywood right now…. From Mumbai culturevulture…

Miss Controversy herself – Kangana Ranaut was also handed a Padma Shri as well – it is the fourth highest civilian award in India.

The star’s online social media put out a video of her thanking everyone for supporting her and she encouraged other women to dare to dream. She isn’t universally popular in Tinseltown having spoken out on a number of issues and some have claimed she is difficult to work with…

At the box office it’s a mixed picture (get it?), none of the recent releases have set the Indian box office on fire this week – ‘Tanhaji‘ with Saif Ali Khan and Ajay Devgn is the best performing film of 2020 – having notched up takings of nearly 225 Crores (Cr), over £22 million and came out on January 10. While it has left the Deepika Padukone star vehicle ‘Chhapaak‘ in its wake in India, Padukone’s story of triumph over adversity is outperforming ‘Tanhaji‘ in the UK, despite being on one less screen at the end of last week (January 24).

Kangana’s ‘Panga’ opened to good reviews but its weekend takings were just shy of ₹15 Crores (over £1.5M) – not a huge number.

The Varun Dhawan starrer ‘Street Dancer 3D’ is doing decently having wracked up ₹41Cr (over £4m), by the weekend.

For films in India to be regarded as commercial hits, they must do at least ₹100Cr (about £10m) business at the box office.

Street Dancer 3D
Cast: Varun Dhawan, Shraddha Kapoor
Director: Remo D’Souza
THIS has been pulling in the punter, but perhaps not as much as it might have expected. Still, it’s early days and the wider impact is discernible, even if the numbers don’t totally bear it out right now.
Dance classes have sprung up in every nook and cranny of Indian cities thanks to reality dance shows and people such as Remo D’Souza, who has helmed this one. The film’s storyline revolves around a dance competition featuring Indian and Pakistani entrants. This movie has been shot in London after completing its shoot in Punjab. The film was supposed to go on the floor about three or four years back but was held in limbo as no studio was willing to back it. It’s got pin-up Varun Dhawan in the lead and so might still pick up as word of mouth grows.

Panga
Director: Ashwiny Iyer Tiwari
Cast: Kangana Ranaut, Jassi Gill
Release date: Friday (January 24)
AFTER giving us a period drama ‘Manikarnika: The Queen of Jhansi’ and a black comedy in 2019 ‘Judgemental Hai Kya’, Kangana is back with the emotional saga of a long-forgotten kabaddi world champion, who makes a comeback to the sport despite facing hurdles. Kangana attracts headlines whether she wants them or not – there were reports she had to sign a no-interference contract before director Ashwiny Iyer Tiwari agreed to her in the lead role. There were also reports that possible co-star Patralekhaa backed out on the advice of boyfriend, star Rajkummar Rao, who said she wouldn’t be able to get beyond Kangana’s shadow.
Incidentally, Tiwari is one of those directors who has made the move from indie cinema to Bollywood. She came to the London Film Festival in 2015 with ‘The New Classmate’, an earnest tale about self-improvement when a mother joins her daughter in school. Her last film ‘Bareilly Ki Barfi’ (2017) did well and opened doors…

Jawaani Jaaneman
Cast: Saif Ali Khan, Tabu Director: Nitin Kakkar
Release date: Friday (January 31)
After last year’s lacklustre dud ‘Laal Kaptaan’, Saif, the Nawab of Bollywood, is back with his latest offering, which is about how the life of a 40-something playboy turns topsy-turvy when it is revealed that he could be the father of a 19-year-old daughter, played by newcomer Alaya Furniturewala.
In a Bollywood first, the trailer was unveiled in London to an expectant media pack a fortnight ago.
The comedy looked a little dated to acv in London, prompting Momtaz Begum-Hossain’s question (see the video below).
Saif handled it well but the jury is out for now here – though the Indian media think the comedy will work on the basis of what is in the trailer – even though Saif himself wasn’t overly thrilled with the excerpts himself and hinted so…
The star has been saying it is a film about acceptance – accepting your age and your responsibilities. Is it a message B-town fans will respond to…?

Gul Makai
Cast: Reem Shaikh, Atul Kul Director: Amjad Khankarni
Release date: Friday (January 31)
THIS film tells the life story of Nobel laureate Malala Yousafzai, who is played by Indian TV actor Reem Shaikh on screen. It is the first fictional narrative film to be based on the Pakistani teen activist.
Director Amjad Khan, who is a Permanent Intergovernmental Observer to the United Nations Economic and Social Council, conceived the film post the assassination attempt on Malala in 2012. Fatima Sheikh, a 16-year old Bangladeshi student was initially selected to play the lead after an extensive search. She had to back out of the project after her family started receiving threats from extremists. Last year, the film was screened in London to an invited audience. Khan who filmed in Kashmir worried about whether the project would antagonise the locals or whether extremists might want to disrupt shooting – he was wrong and the locals were welcoming and friendly.

Happy Hardy and Heer
Cast: Himesh Reshammiya, Sonia Mann
Director: Raka
Release date: Friday (January 31)
A ROMANTIC triangle is set up in London in this music-heavy film shot mostly in London but with scenes too in Glasgow, Edinburgh and Greenock in Scotland. The release of the movie was earlier rescheduled as music maestro Himesh was suddenly selected to be a judge on the singing reality show ‘Indian Idol’ due to music director Anu Malik’s exit. Another reason being the movie’s makers had planned several live concerts in India. But by far the biggest newsmaker for the movie was Ranu Mondal, who was picked up by Himesh himself to sing for it. Ranu used to sing in trains in West Bengal and was spotted by Ahindra Chakraborty, an engineer by profession, at a railway station. Soon a video made by Chakraborty went viral and she was selected to appear on a TV show, where Himesh noticed her.

Privacy & Cookies: This site uses cookies. By continuing to use this website, you agree to their use.
To find out more, including how to control cookies, see here: Cookie Policy
← London Indian Film Festival (LIFF) Reviews 2017: Lady of the Lake; The Argumentative Indian; Newton; Bridge; The Cinema Travellers; Badman; Pinneyum
‘The Hungry’ – First clip screening at London Indian Film Festival (LIFF), product of UK-India collaboration →