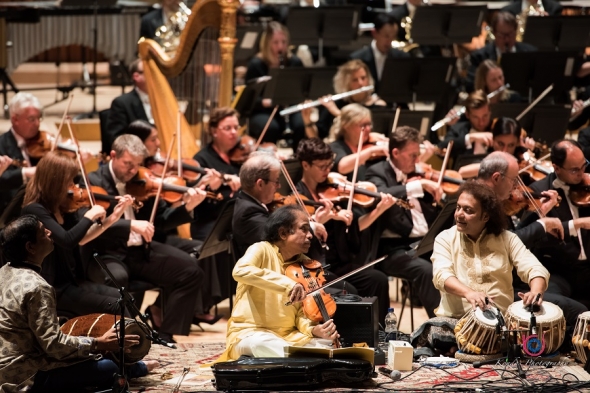 One of the world’s foremost violinists in Dr L Subramaniam, one of the great Indian vocalists in Kavita Krishnamurti and the London Symphony Orchestra… a homage to India’s music through the ages…

THERE was quite the air of expectation as the final curtain was drawn on the UK-India Year of Culture with a special classical musical extravaganza.

A concert of almost dizzying dimensions – with a legendary violinist – Dr L Subramaniam – and much celebrated Indian vocalist Kavita Krishnamurthi – and a world-famous symphony orchestra – the London Symphony – sat down to play out the last of the big set piece event in the UK-India Year of Culture, celebrating India’s 70 years as an independent country free from the hold of the once mighty British Raj.

The concert did not disappoint and was a fabulous triumph – it has to be one of the undoubted highlights of the UK-India Year of Culture.

The Barbican, in the city of London, last night became a cauldron of high and uplifting emotions – at the centre piece of the concert was the Bharat Symphony and diminutive man with an incredible power over his violin. The music represented through the ‘Bharat Symphony’, marked India in four distinct stages.

Commissioned by the city of Chicago for its World Music Festival, the ‘Bharat Symphony’ enjoyed a UK premiere last night; it was first performed in Chicago in September and has also been performed in Latvia.

It was a wonder in itself – beginning with the Vedic hymns of yore, masterly articulated and led by the voice of Krishnamurti. The Indian instruments came into their own during the depiction of the Mughal period, the second of the musical sections.

The tabla and Dr Subramaniam’s violin and the mridangam marshalled a different order and beauty.

While it was a little difficult to tell where the sections ended and opened, the British period saw the introduction of the full symphony and the power and majesty of an orchestra in full flow.

Out of the strings, big European drums, and other familiar orchestral sounds something else emerged, the tabla came back into focus; the beat was heavier and faster – it was neither strictly classical nor strictly popular or populist. This was the sound of epics – shades of the music from the recent global blockbuster – ‘Baahubhali’.

This was indeed a section to marvel at and a very fitting end to the UK India Year of Culture agreed as it was in 2015 by this country’s (then) prime minister David Cameron and India’s PM Narendra Modi.

Conductor Josep Vicent was a lively figure at the centre and his energy transferred to those whom he controlled; the Indians just out of his sight…

The concert started with a more classical Indian repertoire with Dr Subramaniam in charge musically and the mridangam player Srirama Murthy Dhulipala and Tanmoy Bose on tabla and Nagaraju Talluri, the flutist, all taking their lead from inestimable maestro.

A final virtuoso between the three was a fitting close to this short opening session of under 30 minutes.

The last segment of the evening was devoted to ‘Fantasy on Vedic Chants’ a piece commissioned by Maestro Zubin Mehta and originally premiered by the New York Philharmonic. It started with a violin solo from Dr Subramaniam and soon the whole orchestra joined in. Played out in three movements: fast, slow and fast, there were distinct peaks and distinct troughs, where there was still some sound. Mehta had written in some Kritis too, this is a South Indian musical style.

Close of the concert

To the non-expert, it was hard to make out where one style started and another finished in this section, but it was enjoyable and powerful at the same time.

When the final bong sounded and Vicent brought proceedings to a close, there was not an unmoved soul in the house.

It’s a shame indeed that Her Majesty, who had opened UK-India Year of Culture with a reception at Buckingham Palace in February, was not there to witness the finale for herself. And shame too that Cameron was not present. His departure from Downing Street last year effectively meant he was no longer part of something he had helped to conceive.

Earlier a pre-reception concert heard from a host of dignitaries and sponsors, including the Lord Mayor of London, Charles Bowman (who basically represents the City), Katheryn McDowell, managing director of the LSO; India’s transport and highways minister Nitin Gadkri, who was on a short ministerial trip to London; India’s high commissioner His Excellency Yashwant Sinha and Sanjoy Roy, managing director of Uk India Year of Culture producers Teamwork Arts and Ankur Bhardwaj, director of festivals for the Indian company.

Most spoke about the enduring relations between the countries and how culture could strengthen and deepen those ties as both countries look to work together on mutually beneficial economic and infrastructure projects.

*We have a 1-2-1 interview with Sanjoy Roy about the UK-India Year of Culture and what to expect next…read it only here on www.asianculturevulture.com

All pictures (except last): courtesy of ©Kondas Photography

Privacy & Cookies: This site uses cookies. By continuing to use this website, you agree to their use.
To find out more, including how to control cookies, see here: Cookie Policy
← Girish Karnad – tribute event in London and his strong British connections…
‘Sir’ – Gem of a film that has impressed Europe comes to the BFI today as ACV supports screening at London Indian Film Festival 2019 →