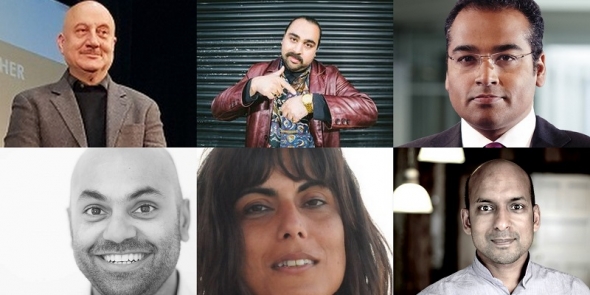 The actor in ‘The Boy with Top Knot’ and ‘The Big Sick’ may have hogged the global headlines but TV execs were also recognised for their part in making some of the best TV on our screens...

TALENT behind the camera as well as in front of it has been recognised in this year’s Virgin Media British Academy of Film & Television TV Awards.

Among those nominated is Bollywood and Hollywood star Anupam Kher for his role in last year’s ‘The Boy with the Top Knot’, a one-off 90 minute TV drama, adapted from journalist and novelist Sathnam Sanghera’s memoir with the same title published in 2009. Kher is up for a best supporting role.

The star was in London recently and spoke of his struggles breaking into the Bollywood as an outsider – sleeping on railway platforms in Mumbai and taking every role he could just to make ends meet at the start of his career.

Asim Chaudhry is nominated for his role as lovable rogue ‘Chabuddy G’ in the hit original BBC 3 series, ‘People just do nothing’ which triumphed at the Baftas last year in the scripted comedy category. This time Chaudhry gets the nod in the best Male Performance in a Comedy programme category.

BBC commissioning editor Ayesha Rafaele has two of her programmes in the single drama category – ‘Against the Law’ (about a time when homosexuality was illegal) and ‘Murdered for being different’ (about the murder of Sohpie Lawrence who dressed as a Goth). She also commissioned and made the award-winning and hugely influential, ‘Murdered by my Father’ (2016) and for which actor Adeel Akhtar won a keading actor.

Deeyah Khan’s ‘White Right – Meeting the Enemy (Exposure)’ a documentary broadcast on ITV about the American Alt Right movement is named in the Current Affairs category.
Sanjay Singhal ‘s ‘One Deadly weekend in America’ receives a nomination for single documentary.

Krishnan Guru-Murthy is part of the team nominated at Channel 4 for ‘The Grenfell Tower Fire’ in the news coverage section. Sky News’ reports on the ‘Rohingya Crisis’ is also nominated in the same section.

‘Emmerdale’ which features Bhasker Patel, is named in the Soap and Continuing Drama section.

The nominations were announced on April 4 and the awards ceremony takes place on Sunday May 13 and Sue Perkins is the host.

For the full list of categories and nominations, please go to http://www.bafta.org/television/awards/tv-2018

BAFTA 2017 – awards for Adeel Akhtar, ‘Muslims Like US and ‘People Just Do Nothing’ with Asim Chaudhry