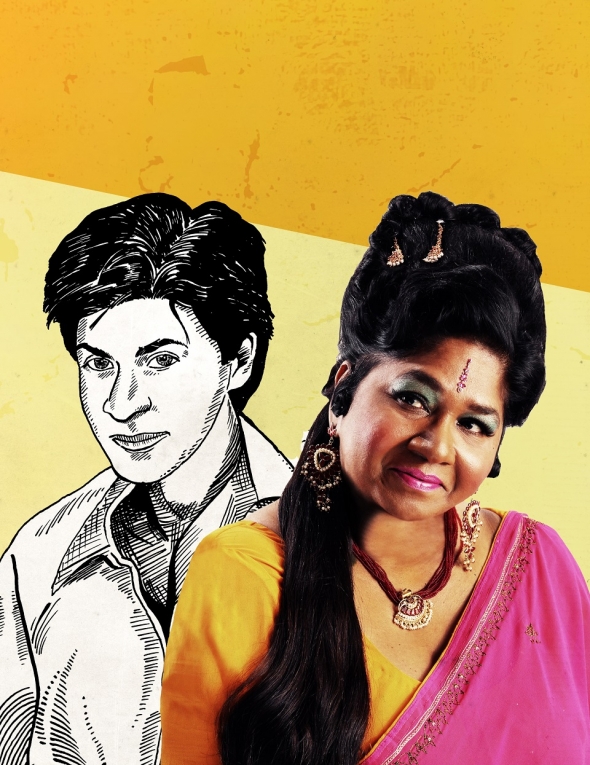 IF YOU watched the last series of ‘Citizen Khan’ you would have seen Rani Moorthy (pictured above) as Mrs Bilal.

No, seriously, we don’t think you would have missed her – after all, she is the only person in the whole world who could have a ‘thing’ about Mr Khan himself (not the dapper Adil Ray, we should clarify, who plays him).

Not even Mr Khan’s wife (played by Shobu Kapoor who talked to us about the latest series – see link below), feels like that.

Moorthy’s comic touch is given much further and wider reign in her latest play, ‘If Only Shahrukh Khan…’ which she has written and stars.

Centred around three women, who share a house and a love of the Indian film megastar, the play is set to debut in Bradford on Wednesday (October 23) and then goes to Manchester and London in November.

Older, wiser and perhaps more mischievous than meets the eye, Rose, Pindy and Kasi, represent something that Moorthy argues, has been missing from many recent discussions about identity.

“As a writer,” Moorthy told www.asianculturevulture.com “I am interested in 1st generation migrants and especially older Asian women.

“I don’t think older Asian women are anywhere to be seen in the media and their lives are rich and complex – it’s not reflected enough and a lot of my work is looking at voices that are not very visible or vocal in public life.”

She is picking up the megaphone (not the rolling pin!) on behalf of Auntijis everywhere in ‘If Only Shah Rukh Khan…’, especially those who are not married.

“Often they are mocked or teased or are just seen as figures of fun or mysterious and strange – and yet many have wonderful lives,” Moorthy pointed out.

Inspired by the great 19th century Russian dramatist Anton Chekov’s ‘Three Sisters’, Moorthy’s play looks at three women, who to some extent have left behind another life and still yearn for Kenya.

“They do not know anything about each other’s past and the thing that really brings them together is the fan club they form because of their genuine love for ShahRukh Khan.

“It gives them freedom and it’s when they really let their hair down.

“It’s all incredibly funny, until they are visited by a young Kenyan man.”

Opiyo is the catalyst for a shift in tone as we learn of the women’s pasts.

“It’s related to a secret of a man left behind in Kenya – maybe an illicit love affair…” Moorthy teased. “I don’t want to give the whole play away.”

Produced by Moorthy’s own theatre company, Rasa, it’s her troupe’s 9th play since its formation in 1998 and one which explores the experiences of those who left Africa and found themselves in the UK more than 25 years ago.

Moorthy first came to the UK from a Malaysian-Tamil background, and was shocked by the acting scene in Britain.

“I was shocked and horrified – in Asia I had my own TV show and couldn’t believe how invisible Asian women were (here) and the kind of TV roles I was being offered were women who don’t speak English or don’t speak at all.”

It may have got better but for Moorthy the older generation are in some ways still being left behind.

“We don’t get these stories  – stories for older men and women and about fathers and mothers who made an epic journey, it took a lot for them to come and suddenly they had no stories…”

Thanks to Moorthy, they do now.