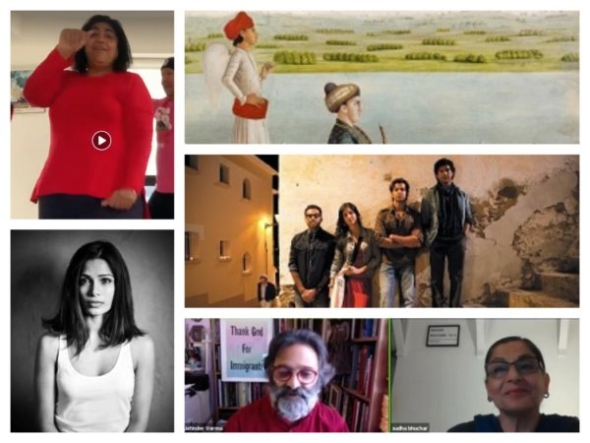 Get in the know…

DIRECTOR Gurinder Chadha handed a camera to her twins and let them help her make a film about living in the Lockdown.
You can see the result on Netflix and it is part of the channel’s ‘Homemade’ series, where it asked acclaimed filmmakers from around the world to channel their creativity during the global pandemic and make short films using only the equipment they had with them at home.
Chadha’s children, Kumiko and Ronak, now 13, made a 10-minute film called ‘Unexpected Gift’ and the director said it is about the time she has had to reconnect with her children and grieve for family members who have died from the virus. The film dropped on Tuesday (June 30).
Among some of the other contributors to ‘Homemade’ are Paolo Sorrentino, Nadine Labaki and Khaled Mouzanar; Maggie Gyllenhaal, Kristen Stewart and Johnny Ma.
Promo Clip: https://www.facebook.com/gcdirector/videos/550287398973246/
Netflix (UK url): https://www.netflix.com/gb/title/81285512

You can still see ‘Mississippi Masala’ for free but hurry as viewing will end at 11.59pm this evening (July 2), thanks to the folks at the London Indian Film Festival (LIFF).
Now in its 11th year, the festival which has gone completely digital his year ends on Sunday (July 5) with a final At Home conversation with Frieda Pinto (pictured) – which will be available from 6pm on the day. On Saturday, there’s a premiere for coming of age US high school comedy, ‘The Miseducation of Bindu’.
Last year, www.asianculturevulture.com hosted a pre-screening reception for the film ‘Sir’ with the event taking place at the BFI Southbank on Sunday, June 23, to mark the festival’s 10th year.
ACV also hosted a reception in 2014 – celebrating 5 years of the festival – for the film ‘Hank and Asha’, which has been available to view during the festival from its platform (see links below).
Our full LIFF preview is here – http://asianculturevulture.com/portfolios/london-indian-film-festival-liif-2020-freida-pinto-mira-nair-vidya-balan-and-ayushmann-khurrana-interviews-as-well-new-films-all-from-june-25-to-july-5-2/ See our ‘Sir story and pictures here http://asianculturevulture.com/portfolios/acv-marks-10-years-of-the-london-indian-film-festival-liff-with-reception-and-screening-of-film-sir-at-bfi-southbank-gallery/
ACV Hank and Asha reception video – https://youtu.be/7XjNgUd0GEc
Where to watch ‘Mississippi Masala’, Mira Nair, ‘Moothon’ and ‘The Miseducation of Bindu’ and ‘Hank & Asha’ – https://www.loveliffathome.com/

Our friends at the UK Asian Film Festival have helped to mount a special outdoor car drive-in screening for the modern Bollywood classic, ‘Zindagi Na Milega Dobara’ (2011).
It plays out on two nights next week, Friday (July 10) and Saturday (July 11) at Ponsbourne Park in Hertfordshire.
A road movie directed by Zoya Akhtar, it’s mostly set in Spain with three male protagonists played by star draws, Hrithik Roshan (pictured above third left), Farhan Akhtar (4l), and Abhay Deol (1l), on an elongated stag do of sorts – but not that far away are the women – Bollywood pin-up Katrina Kaif (2l), and Kalki Koechlin. The film was a commercial success and enjoyed some crossover appeal.
There will be other entertainment and tickets are selling fast. More on this next week.
In addition, the UKAFF’s deadline for entries to its poetry competition is coming to a close – tomorrow (July 3) is the deadline for entries – winners will enjoy spots in an online Mushaira (social gathering and a type of poetry slam) with celebrated poet, singer and lyricist Minu Bakshi on Sunday, July 12. ACV is one of the media partners of the festival, which is held in early Spring and originally started out as Tongues on Fire.
For the drive-in movie – https://www.eventbrite.co.uk/e/bollyco-x-ukaff-x-anomalous-london-presents-bollywood-drive-in-cinema-tickets-110209445418
For the Mushaira – https://www.instagram.com/p/CBvi44cHN_7/

Actor, playwright and founder of two theatre companies, Sudha Bhuchar (pictured right) will be quizzed by one-time colleague and former mentor Jatinder Verma tomorrow (July 3) as part of arts and culture organisation, Manch UK’s continuing series.
Earlier today (July 2) Bhuchar quizzed Verma, who founded Tara Arts in South London in 1976. Its creation changed the young Bhuchar’s life and inspired her to go into acting and the theatre herself, before founding Tamasha and more recently a new theatre outfit, Boucher Boulevard. You will find both on Manch’s Facebook page (see listing below).
Bhuchar’s recent work, ‘Touchstone Tales’ went live on Sunday (June 26). The project created by Revolution Arts sees people share their stories about touch, both before and after lockdown through face to face recorded interviews, online and physical workshops and other types of meetings. Bhuchar has been talking to local groups and others about their experiences and while some of these have been released now – a longer, and more developed work will be released in October.
For Manch UK Facebook – https://www.facebook.com/manchukarts/
Touchstone Tales – https://www.facebook.com/revolutonarts/videos/558027338218844/

Several museums and galleries will be re-opening now that the government restrictions on them have been lifted from this Saturday (July 4).
Among them is the Wallace Collection in central London and there’s a chance to see the much acclaimed, ‘Forgotten Masters:Painting for the East India Company’ exhibition make a welcome return.
Curated by popular historian William Dalrymple, it showcases the work of painters in the employ of senior army officers attached to the East India Company. Almost all the painters are Indian and are subtly subversive in their own way – choosing to paint Indians, the creatures and flora and fauna around them with skill and masterly flourishes. Generally eschewed by India – because of their seeming complicity with the Raj, this is the first time painters, such as Vellapah, Bhawani Das and Ghulam Ali Khan, have been put on display and with such care and prominence. The exhibition originally opened in December 2019 and was scheduled to close in the first week of April with a special Wallace Late opening on March 27 curated by acv contributing editor, Momtaz Begum-Hossain.
‘Forgotten Masters:Painting for the East India Company’ again from July 15 – you have to book tickets and there are new safety guidelines – see https://www.wallacecollection.org/
Our story: http://asianculturevulture.com/portfolios/forgotten-masters-wallace-late-and-what-would-have-been-about-the-painters-of-the-east-india-company/