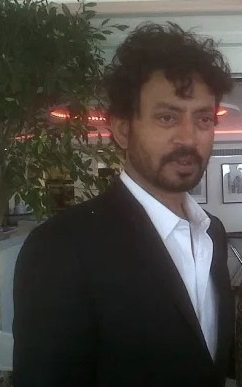 IRRFAN KHAN, one of the India’s best-known international and most versatile actors has died in Mumbai, it was reported earlier today.

He was suffering from a neuroendocrine tumour and had received successful treatment for the condition in London, after first revealing he was ill in March 2018.

He first spoke to www.asianculturevulture.com most memorably at the Cannes Film Festival in 2013 (with the piece being published later after acv came into existence) when he and Nimrat Kaur were there promoting ‘The Lunchbox‘ at its world premiere. It went onto become one of the most successful Indian films ever on an international scale with releases in many countries.

We interviewed him several times during his long and distinguished career and he was an early (and very thrilling for us) follower of acv on Twitter.

He was a fantastic artist, and always intelligent and considered in his interviews with us. He leaves a very rich legacy and has a strong British connection because it was director Asif Kapadia who brought him to the world’s attention with BAFTA-winning film, ‘The Warrior’ (2002).

Up until then he had been a jobbing TV actor, despite training at India’s top drama institute. There was a hugely entertaining and insightful talk between Kapadia and Khan at the London Indian Film Festival in July 2013. It was just before acv came into existence but some of it is in this article
http://asianculturevulture.com/portfolios/irrfan-khan-a-romantic-at-heart/
More to follow #RIP Irrfan Khan (1967-2020)