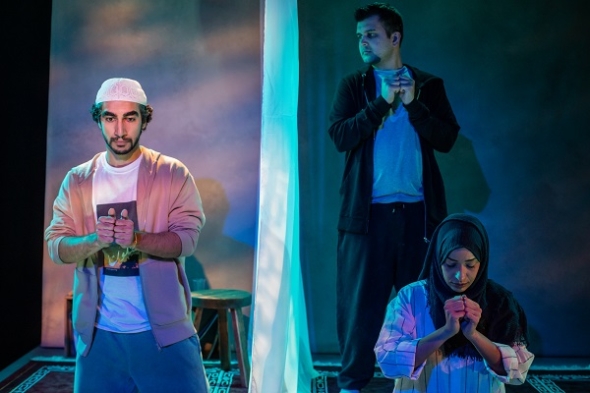 Main character wrestles with culture, expectations and keeping up appearances…

THIS is a story about faith and friendship.

Yasser (Zaqi Ismail) gets reluctantly drawn into spending ten nights in a mosque to perform itikaf – a religious observance undertaken during the holy month of Ramadan and over that period learns a lot about himself and his relationships.

‘10 Nights’ is ostensibly a solo show – presented by theatre companies, Graeae and Tamasha – but two other actors are involved in connecting the dots to make his story come alive.

One is Aneela who is also the performance interpreter (Sumayya Si-Tayeb*) and the other is Aftab (Safyan Iqbal) an absent friend.

When we first meet Yasser, he is just a regular person who goes to pray but is soon manoeuvred into spending ten nights of fasting/contemplation in the mosque.

Although this period is delineated by the repetitive lines of “I eat, I sleep” with the ticking clock marking the passing of time – it feels a bit unclear.

Yasser goes from working out the correct rudiments of the prayer rituals, to personal challenges of reading the Qur’an in Arabic or learning the 99 names of Allah to assessing his relationships with other male friends and basically confronting his past.

It’s a small stage denoting a mosque interior and Ismail plays many characters deftly switching positions on the stage and changing accents accordingly.

He is a range of Muslim men from his dad, to Usman, his friend, rival and pizza shop owner, or Salah the sanctimonious geezer.

There is a lot of banter but what is most interesting is how this play reminds me of Ishy Din’s play, ‘Snookered’ produced by Tamasha which was also on at the Bush in 2012.

Although the two stories couldn’t be more different they are both about Muslim men and masculinity. (Maybe it’s because there is such a paucity of work that you feel one follows the other in a South Asian theatre canon).

‘Snookered’ had friends in a pub meeting on the death anniversary of a departed friend while ‘10 Nights’ features a young man wrestling with his faith and trying to deal with his past and his good friend, Aftab who is clearly no longer with us.

The writer, Shahid Iqbal Khan who has undertaken itikaf himself is comfortable with his own faith and invites the audience to consider what makes a good Muslim? Is it worship or intention?

This is a light touch piece peppered with humour and strong language and counterbalances some of the toxic narrative of Muslim men in wider circulation in society.

Directed by Kash Arshad, ‘10 Nights’ is an enjoyable show well acted, presented in British Sign Language and captioned in English/Urdu. I was curious to know how some of the strong words were translated.

This role is shared with Chandrika Gopalakrishnan (but Sumayya Si-Tayeb was performer when ACV attended).

All pictures: Courtesy of The Bush Theatre and by Ali Wright

Privacy & Cookies: This site uses cookies. By continuing to use this website, you agree to their use.
To find out more, including how to control cookies, see here: Cookie Policy
← International Film Festival and Awards Macao (IFFAM) opens today (December 5) – we are in Macao, welcome…
IFFI50 – The Final wrap, what’s coming videos and bird bite news from the fest… →